The Disturbia yarn and the featured shawl patterns have been a hit during the launch of the Knit365 collaboration. Here's more about the Disturbia crochet design and the things I've learned along the way.

Firstly, I was absolutely honoured to have been asked to collaborate on this project. When I found out that Louise Tilbrook would be the featured knitwear designer, I lost my mind. I have admired Louise's work for a very long time and could not believe that I would be working alongside her! It was amazing. I was also very excited to work with Martyn and Gemma on a shawl design that would feature a very special yarn. To say that I was flattered was an understatement. It was the highlight of my design career so far.

As well as this being a fantastic opportunity, it came with some challenges.

Designing a one skein shawl for crochet is a massive challenge. This made designing a one skein crochet shawl a huge challenge. I was tasked with designing a shawl that required only 430m of yarn, was accessible to those who are not as confident with crochet and one that would be long enough for someone to wear. Sounds straightforward, right? It wasn't. I was so worried about designing 'the shit one' as opposed to the knit one as you can get quite a lot of shawl from 100g of yarn if you're knitting it. That being said, I am so pleased with how it actually turned out! I worked closely with Louise Tilbrook as we needed to create two designs that looked related but had their own unique elements. Louise was kind enough to let crochet lead when it came to us discussing shapes and lengths, as crochet had less flex than knitting in this instance. Even though the lovely Gemma of Little Grey Girl would have sent me an extra skein in a heartbeat, I wanted to stick to the more accessible, affordable option as we didn't want anyone to feel left out of the KAL/CAL.

Would I have done anything differently?

I probably could have got a lot more meterage out of a lace or mesh style shawl but it would have frightened the already hesitant makers off, I feel. It had to be something that was beginner friendly, so we have this 'skinny scarf' style shawl that can wrap a few times! As a knitwear and crochet designer, it's always hard selling crochet patterns. There is a real lack of confidence out there when it comes to crochet among knitters and even the most basic pattern can look confusing. I've created something really simple and rewarding with those makers in mind. On reflection, I wouldn't have done anything differently. Not everyone likes the crochet one (or crochet in general lol) or could do the crochet one but that was always going to be the case!  The whole point of this KAL/CAL collaboration is so that there is something for everyone and we can all get involved, so I think I did the job that was asked of me.

Absolutely. Working with Martyn, Gemma and Louise was lots of fun. Not only was it refreshing to get to work with other creatives but it really rejuvenated me work wise. Having an online business and being the only person running it can be so lonely at times. You can lose your focus and motivation to design new things or come up with new ideas, so collaborating and working to someone else's design brief was a lot of fun. I feel more confident than I did and I'm ready to smash some more designs out this year.

The two shawls are exactly as Louise and I wanted them to be. They are a similar shape but have our own unique twist on them. 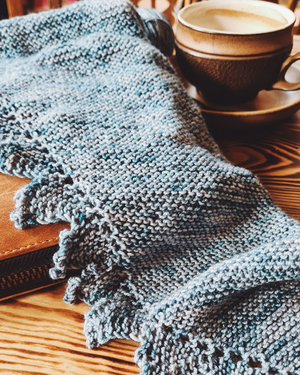 Louise's has a lovely shark tooth style edging that is knitted as you go. Mine has a crochet shell edging that can be added at the end!

Here's a close up below of the lovely yarn too. You can read more about it in the link to The Little Grey Girl yarn at the bottom of this page! Where can we find out more about the KAL/CAL?

The KAL/CAL starts in March. The best way to make sure you don't miss anything is by subscribing to Martyn's Youtube channel here. I will be on hand to help with any crochet related questions via the live streams or via my Youtube channel tutorials and I will be knitting Louise's knit version too!

The Do Not Disturb Shawl pattern by Louise Tilbrook.